Following the recent announcement that the new, peer-reviewed journal The Anthropocene Review has launched (based from the Department of Geography and Planning, School of Environmental Sciences), we are delighted to confirm the Table of Contents for Issue 1 of our journal. These contributions will present research on many aspects of the Anthropocene ensuring the journal lives up to its transdisciplinary remit.

Whilst the full issue will appear in print in April 2014, articles will appear as OnlineFirst versions as soon as the proofs have been accepted by the authors. These will be hosted on the journal website. We would particularly like to highlight that SAGE are currently offering free online access to The Anthropocene Review.

Interested readers can subscribe to RSS notifications or email alerts via this website and it will also contain information about the journal that is not hosted by our blog, including specific details on manuscript submission, how articles are indexed by SAGE as well as information on permissions for posting reprints of manuscripts.

Lastly, we are continuously searching for contributions to future Issues. Why not consider submitting a manuscript to this important new journal?

Barnosky AD and Hadly EA. Problem solving in the Anthropocene.

Malm A and Hornborg A. The Geology of Mankind?  A Critique of the Anthropocene Narrative

Fischer-Kowalski M, Krausmann and Pallua I. A socio-metabolic reading of the Anthropocene: modes of subsistence, population size and human impact on Earth.

When I told people I’d be spending my summer break between A-Levels and University teaching English in a summer camp in Romania, I was met with more than a few shocked expressions and raised eyebrows. I tried to keep an open mind, however – the chance to travel to somewhere you don’t often hear about, other than the negative stereotypes, was as exciting as it was daunting, and I had no idea what to expect. My experiences were rewarding, and gave me first hand experience of geographical issues that I am now studying at University.

After a lengthy application process, I was selected in January 2013 to volunteer with Tabere Engleza, which is a lot smaller than many volunteer programmes. There were only 8 volunteers, most of whom, myself included, had been told about the programme by a friend of a friend who’d been the previous year and had loved every minute of it. It gave me something to look forward to while sitting my final A-Level exams.

After months of preparing lesson plans and making travel arrangements, we arrived in Bacau, northern Romania, in late June 2013. We were greeted at the airport by our boss for the next four weeks, English teacher Ina Dorneanu. She had 15 years experience in education, and became a really close friend in a very short time. She made us feel like we were not only part of her family, but also part of her country. I thought I was well informed and prepared after reading a variety of travel blogs, tourist guides and websites, most of which are filled with horror stories that are almost always unfounded, but living and working with Ina gave me a new perspective on Romania, and the significant progress that has been made there in the past 25 years, because of inspiring people like her.

The summer camp we stayed in, a 3 hour drive from the airport, was completely isolated – the only places nearby were a small hotel and some kiosks selling food. The nearest city, Buzau, was almost two hours away by bus. After a good night’s sleep and the morning spent getting used to our surroundings and preparing our materials for a week of classes, we were introduced to our first group of students. We spent the evening with them, dancing with the little ones and getting to know the older ones, who had so many questions about us and our homes and families. 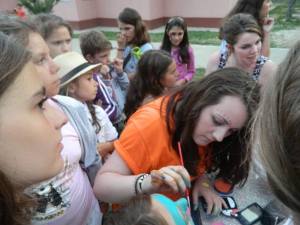 Working on my face painting

Undoubtedly, the most rewarding part of the whole experience was working with the children. It took me a while to get used to teaching my own classes, so in the first week, I had the help of another amazing teacher, Cristina, who gave me plenty of lesson ideas and made the children really enthusiastic. At first, it was so intimidating, having 22 faces looking up at you, expecting to so much from you!

Every Monday, when the new groups of students arrived, we were filled with anticipation – would they like us? Would they be able to understand us?  Some children’s teachers had requested they keep a diary of their experiences, and it was so rewarding reading these, most of them going into detail about how they enjoyed the activities we’d planned for them and how they loved getting to know us.

We taught for around 3 hours every morning in ‘formal’ classes, although these were outside and very relaxed, usually involving the children writing stories or having class discussions about their ambitions. In the afternoons, we really got to know the children better, doing art and craft activities with them or taking them swimming. The highlight of the second week was a huge impromptu water volleyball game that lasted all afternoon and got dangerously competitive. The evenings were full of new experiences for us, such as a weekly night of traditional Romanian dancing. It was amazing to see how the children understood the traditions of their country, and were eager to share them. They were shocked when they asked us about British traditions and were met with long pauses and confused looks while we tried to think of something to say. 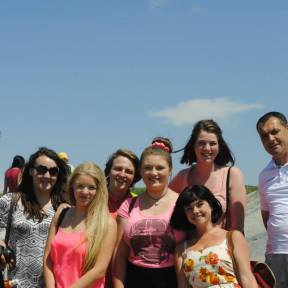 At the end of every tiring week, Ina rewarded us for our hard work, which was completely unexpected, this included a trip to the ‘vulcanii noroiosi’, a geological site, predicted to soon become a popular tourist attraction and one of Buzau’s biggest sources of income. Travelling around Romania was a really strange feeling – the country is almost untouched by tourism, so people showed a lot of interest in us, and it was surprising how difficult the language barrier was. The children had returned our favour and had started teaching us some Romanian, although success was limited, especially in my case. 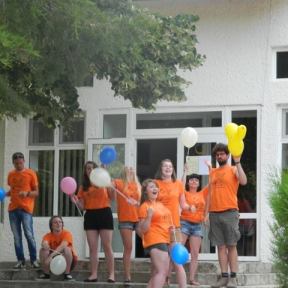 Preparing for our final goodbyes

On our final night, we entered the dining hall and were surprised by sight of all the Romanian teachers applauding and coming to hug us, thanking us for everything we’d done. We then all enjoyed a barbecue together before a final presentation where we received certificates from the local County Department of Youth (the Romanian equivalent of a Local Authority), and said some very emotional goodbyes. 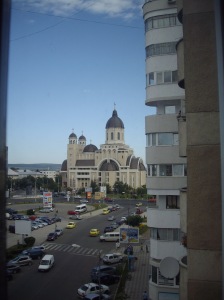 View from my bedroom, Bacau

At the end of my trip, I was privileged to spend a few days living with Alina, one of Ina’s colleagues, another English teacher who showed me more of Bacau. I stayed with her in her mother’s apartment, in a Communist-era high rise block overlooking the city, complete with antique furniture and stunning views of the city’s Romanian Orthodox cathedral. She took me to the school where she worked, and I was lucky to meet the school counsellor, who has to provide emotional support to 800 students, as well as giving careers advice. Unsurprisingly, the classrooms lacked the resources and modern technology of British classrooms.

Since returning home, I’ve stayed in touch with almost everyone I met in Romania. I’ll hopefully be returning next summer and I’m now working to recruit more volunteers, giving presentations in schools and colleges about my experiences. I’m also putting the teaching skills I learned into action, by volunteering with Student Action for Refugees, teaching English to refugees and asylum seekers at Asylum Link Merseyside. It’s benefitted my studies, too – I’ve been selected for the UK Department of Business and Innovation’s Study China Programme, and the time I spent in Romania formed an integral part of my application.

When I started my studies at University of Liverpool in September, I was pleased to discover that international development was a key part of one of my first semester modules, ‘New Horizons in Human Geography’ – this was the aspect of my A Level Geography course that I enjoyed the most. Studying this in depth at University has allowed me to understand the role that smaller organisations, like the Romanian children’s charity, play in reducing poverty, and I have now been able to compare this to the importance of IGOs, like the UN. Witnessing international development at a local level, and then studying the theories and approaches behind, it has given me a valuable insight into an area of geography which is not only vital for the international community, but could also become a future career option for me.

If you want to know more about my experiences, or are interested in applying for the programme, applications for ‘Tabere Engleza’ 2014 close 20th December. For more information, visit www.tabereengleza.ro or contact a.guy@student.liverpool.ac.uk.

For anyone interested in Liverpool on monday, there is a film screening in the Geography Department of the film ‘Bhopali’, which is about the Bhopal Gas Disaster and its continuing legacy. Please contact me for further info.