Come join the team at Liverpool Geography! We are seeking a Postdoctoral Research Associate to work on a recently awarded Economic and Social Research Council (ESRC) Secondary Data Analysis Initiative Phase 2 project ‘Population Change and Geographic Inequalities in the UK, 1971-2011’. You will join the project team (Principal Investigator Dr Chris Lloyd; Co-Investigators Drs Gemma Catney, Alex Singleton and Paul Williamson) to explore geographic inequalities in the UK and how these have changed over the last 40 years. The project will involve the development of a set of population surfaces for a wide array of socio-economic and demographic variables for the UK Censuses of 1971-2011. These population surfaces enable the assessment of changes over small geographical areas. The production of surfaces will allow detailed analysis of, for example, the persistence of social deprivation at the neighbourhood scale or the ways in which housing tenures have changed across the regions of the UK.

You should have a PhD in Population Geography, Geographic Information Science, or the broader Social Sciences (with a quantitative focus). Experience in manipulating large datasets and some programming experience would also be desirable.

The post is available until 31st July 2016. Deadline for applications: 23rd January 2015. For more information and to apply see http://www.jobs.ac.uk/job/AKG036/postdoctoral-research-associate/

Dr Gemma Catney has just published a book Minority Internal Migration in Europe, co-edited with Dr Nissa Finney, a colleague at the Centre for Census and Survey Research (CCSR) at the University of Manchester. The book brings together leading scholars in the fields of migration, ethnicity and diversity to form a collection of 13 research chapters, examining patterns of residential mobility of minorities, and synthesising key themes, theories and methods. The additional introductory and concluding chapters of the book bring together these themes to form an agenda for future research on minority and immigrant internal migration in developed societies. The book also contains a comprehensive reference list containing the most recent and significant work in the field.

Immigration is a major component of population change for countries across Europe. However, questions remain about where immigrants go after they arrive in a new country. What are the patterns of internal migration of minorities (immigrants and their descendants), and what are the causes and implications of these flows? Migration within a nation state is a powerful force, redistributing the population and altering the demographic, social and economic composition of regions, cities and neighbourhoods. Yet relatively little is known about the significance of ethnicity in migration processes, or how population movement contributes to immigrant and ethnic integration. Minority internal migration is an emerging field of academic interest in many European countries in the context of high levels of immigration and increased political interest in inter-ethnic relations and place-based policies; countries represented include Belgium, the UK, Portugal, The Netherlands, Israel, Germany, Turkey, Greece, Sweden and Spain. The analyses presented in Minority Internal Migration in Europe make important contributions to theories of migration and minority integration and may inform policies that aim to respond to local population change and increasing diversity.

The book is part of Ashgate’s International Population Studies Series. Praise for Minority Internal Migration in Europe so far includes “…for scholars of minority populations this is the book to read in order to learn about the dynamics of relocation of those minorities which will influence the future shape of our ethnically diverse societies” (Prof. Phil Rees, School of Geography, University of Leeds) and “[the] chapters benefit greatly from following a consistent structure in which overviews of immigration history and policy lead on to discussion of conceptual and theoretical frameworks and to new, mainly nationally-based, empirical analyses. The editors’ opening and closing chapters reinforce the themes of importance of place and diversity of experience, serving as a powerful reminder of the dangers of generalising about immigration and its impacts on sub-national population structures and distributions. I also applaud their concluding research agenda that challenges us to take advantage of the 2010 census round and other sources to update and deepen our knowledge and understanding of this migration.” (Prof. Tony Champion, Centre for Urban and Regional Development Studies, Newcastle University).

I am the project secretary and Dr. Andy Morse is the coordinator of the QWeCI Project – Quantifying Weather and Climate Impacts on Health in Developing Countries.

In this project, researchers across 13 European and African research institutions work together to integrate data from climate modelling and disease forecasting systems to predict the likelihood of an epidemic up to six months in advance.  The research, funded by the European Commission Seventh Framework programme, focuses on climate and disease in Senegal, Ghana and Malawi and aims to give decision–makers the necessary time to deploy intervention methods to help prevent large scale spread of diseases such as Rift Valley Fever and malaria.

Read about the recent activity in the latest QweCI Project newsletter, which can be downloaded here, and more information can be found here. 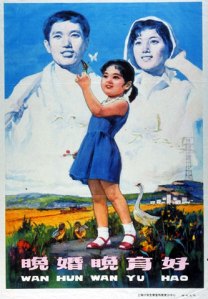 Translation: “It’s better to marry and have children at a mature age.”
Photo credit: Courtesy of the Medical Materials Clearinghouse at the Johns Hopkins University

With the first week of the new academic year comes the first week of our second year course on ‘Population and Societies’. Population is a topic that is never far from the headlines. Unfortunately, this media coverage can leave in its wake a trail of widely held misconceptions, which we then have to ‘unlearn’.  For example, would you be surprised to hear that the death rate per 1000 population is three times HIGHER in the United Kingdom than in the Gaza Strip and West Bank? (CIA World Factbook) Not that this means that life in Palestine is safer; just that the Palestinian population is relatively youthful. Which leads on nicely to an exposé by Anna Lietti, writing in Le Temps, of the media myth that “Muslim countries are plagued with large families and ever-swelling masses of young people, who are a threat to stability”. As Lietti points out, this narrative is somewhat undermined by the fact that many Muslim countries are currently passing through a very abrupt Demographic Transition from high to low fertility. Tunisia, for example, now has a LOWER fertility rate than the United States (UN Population Division). Finally, a switch of continent. A recent study by Cai Yong, at the University of North Carolina suggests that, far from being a ‘success’, the Chinese ‘one child policy’ actually slowed the pace of fertility decline. The explanation Yong advances is a classic example of the ‘law of unintended consequences’.  The one child policy caused anxiety, which prompted many couples to have a first child at a younger age than they would have otherwise, which in turn left them more time to have subsequent children. For other reasons, as the BBC reports, the policy is currently under review.